On Saturday I had my first tri of the season, Blue Lake Sprint.  This was the first tri I did back in 2009 (not as a relay).  I was hopeful I could beat my times and come away with a PR.  Officially, I have no idea what my time is because my stupid timing chip came off after the swim and even though I carried it with me the rest of the race it didn’t record any of my times!  Grrrrrrrr!  Luckily I was wearing my watch and I do have a bike computer so I have an idea what my times were but I was and AM  pretty annoyed.  Anyway, my watch which I started at the beginning of the swim reads 1:55:02 so I’m going with it.  Sadly, not a PR (also not a PW) but I did PR the bike which is all I was really gunning for on this race.
Mr. Pi is back in training for another 50k and had a long run to do of his own so Jen came to be my Sherpa ( and photographer) for the morning.  It was awesome to have her there!  She clearly knows tri’s and has always been a go-to person for me for advice on races, especially tri’s.  Heck, she didn’t get the name tri guru for nothing!  Thanks so much Jen!
Here are a couple of pre-race photos! 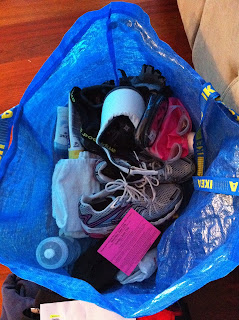 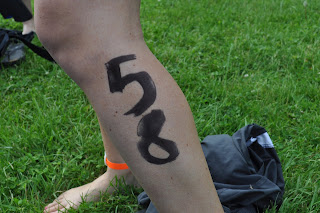 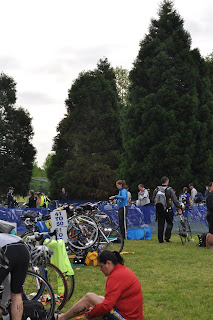 Setting up my transition area
Amy was also doing this race.  Since we are in different age groups it’s always fun to see her out on the course.  Her age group was the second wave and I think mine was the 6th or 7th so when I saw her on the bike she was on her way back and I was on my way out and same on the run.  She did great and it is so nice to have a another tri buddy. 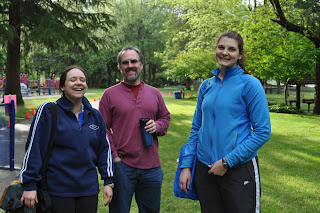 Amy, the architect (aka her sherpa) and me 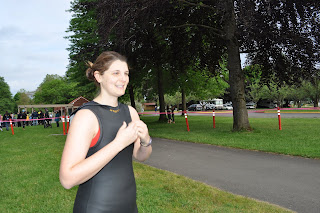 Putting on my blubber suit

The swim:
Anyone that’s read this blog for any period of time knows I love to swim and that the swim is usually where I thrive in tri’s.  The minute I hit the water I knew there was something wrong.  I thought it was just the cold water or the crowded conditions so I swam to the outside of the crowd and kept going but it wasn’t that, it was my HEARTRATE.  I couldn’t get it to slow down.  My breathing and heartrate in the water is usually very comfortable.  I tried to slow down but it wasn't slowing and I just sorta panicked which is SOOOOOOOOO not like me.  I love the water! I felt helpless and just talked myself through the rest of the swim.  Needless to say my swim time (from what I remember seeing on my watch was pretty slow) was approximately 18:30.  This is several minutes slower than my swim PR and also NOT how I wanted to start my tri! 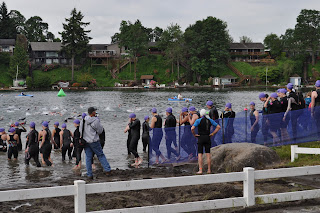 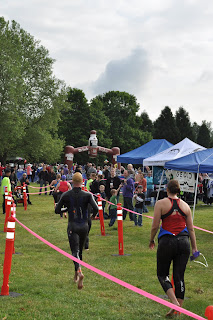 Into T1 don't I look dejected!  I felt it.
T1:
In T1 I still felt really weird and my heart rate wouldn’t slow down.  I didn’t even run from the swim to transition I decided to take my time and walk.  As I was putting on my bike shoes my timing chip came off.  Grrrr…I yelled to Jen and she said stuff it in your shirt so I did.  I grabbed my bike and off I went down the REALLY LONG track to the bike mount.  Again, I decided just to walk it.  I estimate T1 was at least 5 minutes--I figured the longer I spent "resting" in transition the more my heartrate would go down. Sadly, that didn't really work. 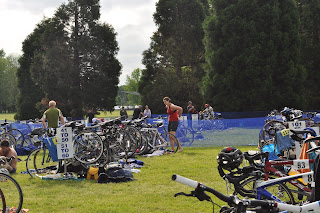 Shoving my timing chip in my pocket...grrrrrrrrrrr 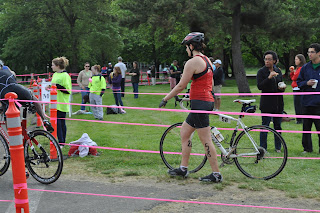 Trying to get my heart rate down by walking to the mount line
Bike:

I knew I would be encountering a head wind on the way out but I just hunkered down in my drops (which I don’t normally ride in) and went for it.  I kept my eye on the bike computer and told myself nothing below 15 MPH.  My heartrate at this point was still high but I was trying to ignore it.  At this point, I had suspected it was the result of a medicine that I was recently prescribed.  It didn’t occur to me that the meds would have this affect but I figured that was it.  I kept thinking if I feel really crappy I can just walk the 5k and still finish.  So, I kept hammering away.  I was passing people!  This was shocking as I never pass people biking! Other than my heartrate I felt great.  My legs felt strong, I felt strong.  I rolled into T2 feeling better about the tri knowing that I PR’d the bike.  I hoped off the bike and glanced at the bike computer-- I distinctly remember because I was so proud of myself (and that I rechecked after the race): 43:55, which is a 16.39 MPH pace---while that might not be super fast I was really pleased. 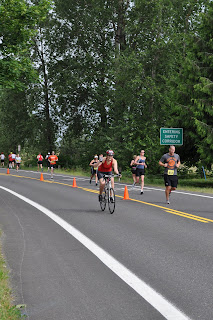 Not feeling great but really excited about my bike performance and knowing that on a day I feel totally healthy that I can maybe go even faster! 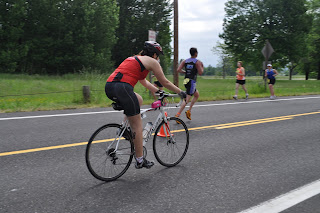 Finishing the bike
T2:
I took my time again and drank a bunch of water hoping that would help my heartrate.  I also dropped my visor and my hair tie twice while in transition forcing me to stop and pick them all up. I estimate T2 to again be 5 minutes maybe more.
Run:
This is where things got really ugly.  I just felt awful.  My heartrate and breathing were really rapid even when walking.  I tried my best and am pretty sure my 5k was over 40 minutes, since I know my overall time and approximate times for the other events.  By the time I was rounding toward the finish, I thought I was going pass out.  I crossed the finish line, gave them my timing chip (which didn’t even work mother effer) and literally crashed to the ground.  I didn’t pass out but I felt my knees weakened and I just sat down.  Jen, Amy and the architect were all around me.  They called the medical people over and I literally could barely answer any of their questions, I was just kinda out of it.  It was one of the scariest moments I have experienced ever.  As my heartrate lowered I started to feel better but it took several minutes.  I was thankful to have so many supporters around me. 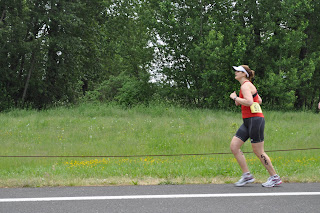 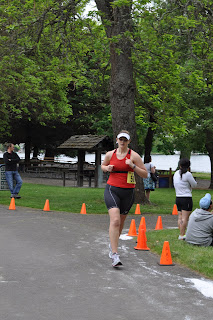 Almost to the finish and feeling really terrible 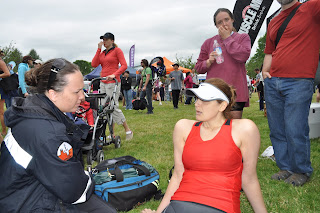 Medical attention, seriously she had to repeat her questions like three times because I just couldn't comprehend what she was saying. 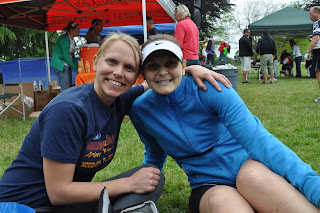 Finally feeling better, enough to eeek out a smile with my sherpa 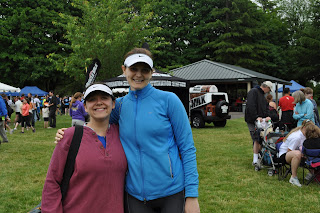 Triathlon finishers
Clearly not my best race but now that it is 24 hours later and have received an email back from my doctor confirming that it was most likely indeed the medication that caused my heartrate to spike I feel much better about my performance.  I know what I need to work on for my Olympic in July.  I will be doing more bricks and continue to work on my biking.  I also plan to go out for an open water swim soon just to prove to myself that it was a fluke thing and that I still feel at home in the water.  Note to self: If getting new meds ask Doc BEFORE the race if it may affect me and then evaluate if it's worth it.  I think if I had known that the meds would affect my heartrate I might not have panicked so much during the swim and I might have been able to calm myself down.  Maybe, maybe not but at least I wouldn't have been freaking out the whole time.
The weekend didn't end with the race...later that evening Jen and Zach had their housewarming party.  There was great food and conversations.  It’s always fun to see the group outside of our sweaty excursions. I'm sure Jen will post more photos but here are a couple. 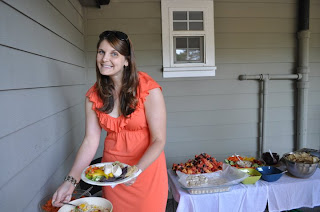 Not being shy about digging into the food! 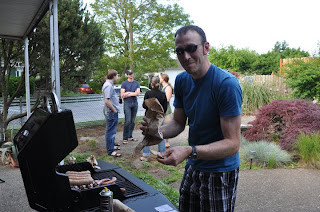 Zach grilling up sausage that was sooooooo GOOD! 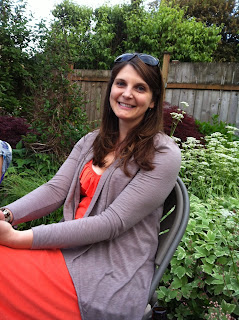 Hanging out in the english garden.  Note on this photo: I spent so many years as a blond that it still kinda shocks me when I see pictures of myself as a brunette.  Sometime I should do a comparison post and see what people like better blond or brunette.
Today, I skipped my long bike ride not wanting to risk another heart issue.  Instead I did a lot of yardwork and cleaning, fun times.  It is nice to start the week with a clean house and a tidy yard.

What did you do this weekend?  Have you ever had a medial issue during a race?