I use the term "race" very loosely as I didn't "race."  Going into this weekend I was really doubting that I would finish.  In fact, I had a whole blog post ready to publish about how I slacked in my training and how I didn't really want to do the race at all.  Well, I didn't publish that post mostly because I didn't want to be a Debbie-downer.  My training was slacker-ish especially the last couple of weeks but I did get in all my long runs.  I figured worst case scenario I could do the half and skip the full.  Well, I did both and turned in two PW's but had a great time doing it.  Mr. Pi on the other hand turned in a half time not too far off his PR and a super speedy marathon time to boot. 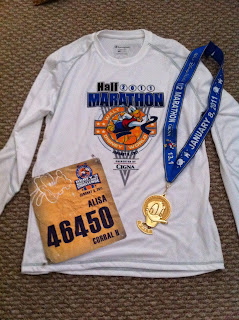 Half Marathon shirt, bib and bling

Waking up at 2:45am east coast time wasn't very fun but once I was up it was okay.  Mr. Pi and I got to the start area and headed to our respective corrals. 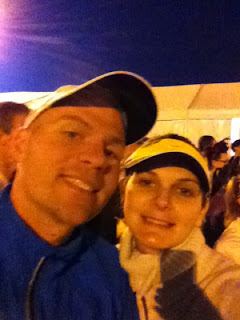 For about 4:00am I think we look pretty good!

I met up with Melanie (thank goodness) and her sister in my corral.  The plan was to take it easy and stop at every character on the course for a photo.  Melanie was also doing the full the next day so we were both trying to conserve energy.  Soon enough corral A was off and running, there were fireworks 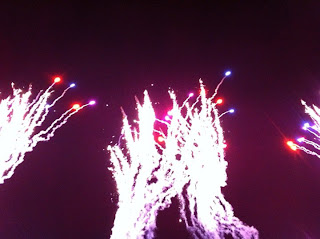 and all was fine and dandy until over 45 minutes later corrals were still going waiting.  Being in the back was annoying!  I think I was put in the wrong corral as when we hit the start line people had started off walking.  Grrr annoying, especially because after all that waiting I really needed to go to the bathroom!  Anyway we weren't going to let that stop us from having fun.  About mile 2 we saw Pooh so we stopped.  I noticed there were runners returning on the other side of the road and I thought to myself wouldn't it be cool to see Mr. Pi.  Well, not 2 minutes later I DID!  I ran over the median and got a mid-race kiss, he was already at mile 10-11 and I was barely past 2---poor him waiting at the end.  I got my photo with Pooh but it's blurry: 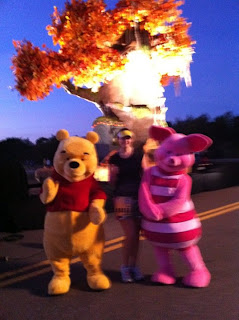 Blurry Pooh Picture
By the time we hit the 5k, which was like 55 minutes, I realized a couple of things: 1) I needed to pee really bad and 2) it was going to be a LONG half marathon better make the most of it.  After we stopped to use the porto's we picked up the pace slightly and trekked through the rather lack luster part of the course.  While Disney is organized and had plenty of entertainment and water stops, about 4-5 miles into the half course I was getting worried about what the full was going to be like.  We had done most of our miles on the entrance roads and through parking lots.  (Spoiler alert: The full course was AWESOME!)
Anyway, about mile 6 we FINALLY entered the magic kingdom.  We ran down main street toward the castle--hooray! 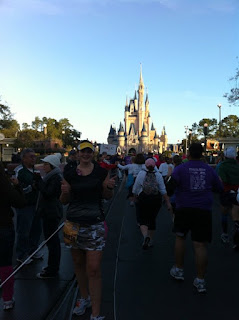 castle!
Just to do a little comparison, here is Mr. Pi at the Castle. 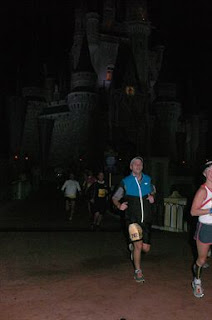 Mr. Pi at the Castle, notice how dark it is when he was at the castle.
By this point, we were basically surrounded by walkers and for the running portions of our race we were dodging in and out of people walking 3-5 abreast---double annoying.  But again, we didn't let that stop us we simply dodged and got in line for the next photo.  In tomorrow land, we stopped for a photo with Buzz. 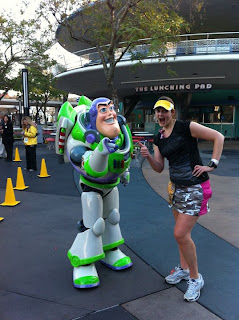 Then we ran past the tea cups and found Alice. 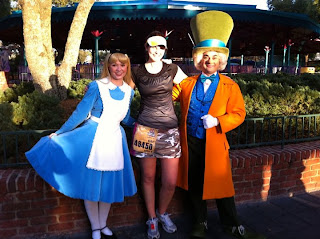 Alice and the Mad Hatter
As we wound through the Magic Kingdom there were lots of characters to stop for and so we did! 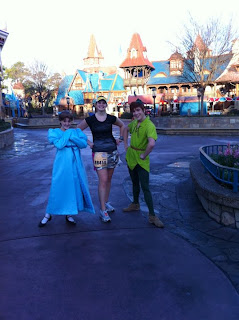 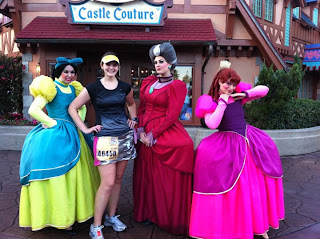 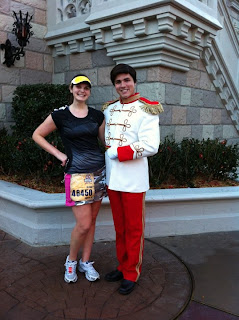 Mr. Prince Charming himself (who was very nice by the way) 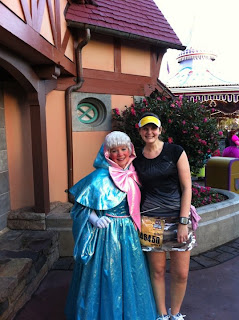 Through the castle we ran and around toward Frontierland.  Waiting for us around behind Splash Mountain was the longest line but also one of my favorite pictures: 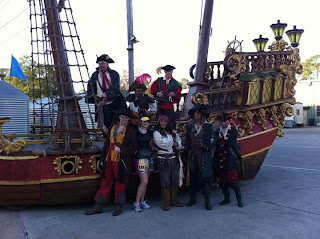 Pirates!!!!!!!
We were about 8ish miles into the race at this point and we were through the Magic Kingdom back along back roads.  Dodging the walkers was getting annoying but I still had Melanie and her sister to keep me company.  Then, we saw one of my very favorite Disney movie characters: 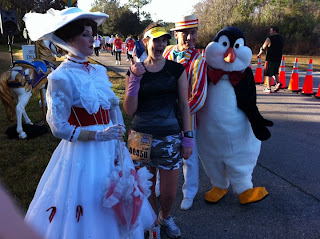 Mary Poppins!
Not too much further down we these two guys and we HAD to stop: 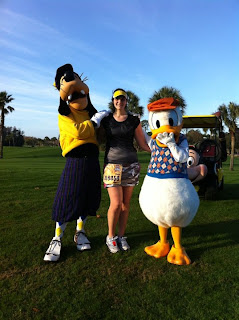 Goofy and Donald
This was about mile 9ish and we heard someone say that the sweeper balloons weren't too far behind us.  This meant that we had to stay ahead of the balloons if we wanted to be official finishers.  LOL, never have I ever been worried about a time cutoff.  It was pretty funny to be running with Melanie (whose half PR is well under 2:00) and her sister (who is right about the 2:00 mark) and for us to be so far back the sweepers were closing in.  We picked up the pace at this point and ran along to the far left trying to not have to dodge in and out of people. By this point my Garmin was already reading half a mile longer than the course mile markers.
A few minutes later, I decided I was far enough ahead of the balloon sweepers that I could afford to slow my pace to a slower jog (more like shuffle).  So I let the other two go on ahead though I should have just sucked it up and stayed with them because I could pretty much see them for almost the rest of the race.  I trotted along thinking about how smart I'd been to take it easy and how much I was in denial about having to run a full marathon the next morning.
What felt like only a few miles later I was closing in on the finish line.  One thing that was awesome about starting in the back was that for most of the race I was passing people, especially toward the end.  My 11:30 miles were smoking the walkers.  As I rounded the corner to the finish I saw Mr. Pi and some of the rest of the Pi family---I waved and raised my hands up high for the finish.  Finishing the slowest but happiest half marathon to date in 3:19:05 minutes. Yup, that's slower than Mr. Pi's Big Sur Marathon time--LOL. 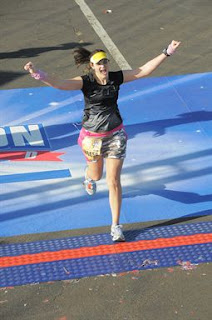 Half of the Goofy Challenge DONE
I got my Donald medal and headed to find my family that had been waiting around for hours---sorry guys but thanks and I love ya! 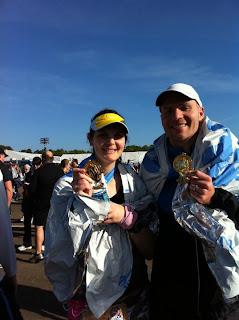 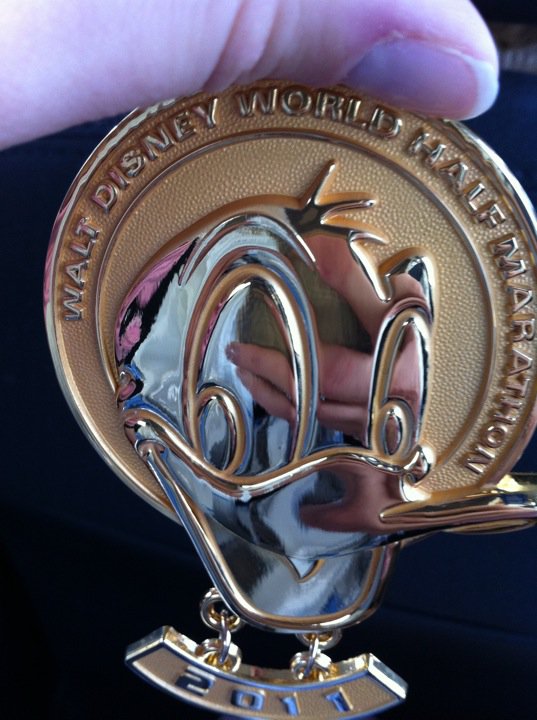 Half Marathon Bling
Since I'd taken it so easy I really didn't feel too sore.  However, my feet had already taken a beating.  But by 7:45pm I was in bed ready for a good nights sleep with the alarm set for 2:45am ready to run the full.
Stay tuned for Goofy Challenge Race Report Part II.
Posted by Alisa at 1:11 PM
Labels: Goofy Challenge Race Report, Half Marathon
Newer Post Older Post Home