Week 3 of Goofy Training went really well.  I'm working on getting over my mental hang ups about pacing etc.  I did start to encounter my weird foot pain, which I have self diagnosed as Morton's Neuroma.  Basically, I need to stop wearing heels at work and find lots of comfy flats with a wide toe box.  I'm in comfy flats today and my awesome old lady compression stockings from Discountsurgical--they are hot.  I'm only going to wear heels if it's absolutely necessary and hopefully not for long periods of time.  I'd rather be able to keep running than wear cute heels.


Brief recap of the week before I get into my Nike Women's race report!


Monday: I was going to run long but took the day off instead.
Tuesday: 4.5 hilly terwilliger miles --felt fantastic!
Wednesday: 3 mile tempo run --- working on getting over my mental hang ups.
Thursday: 5.5 steady state run -- really windy but I got through the miles along a new route and felt good at the end, minus my foot hurting.
Friday and Saturday: I took off.
Sunday: 13.1 Nike Women's Half Marathon---almost a PW but it was totally worth it and was probably the most fun I've ever had at a race!
Total miles: 26.1 (mileage is getting up there)

This is my second year doing Nike Women's and it's a race I really enjoy.  It's not a race I would ever do for a PR but it's a super fun and scenic race to do with friends.  A group of us including Marya and J drove down from Oregon to California.  Eventually we met up with Kristen and her sister but that was later on Saturday.  The drive down was LONG as per usual but the car company was great.


Friday night we spent at my Dad's in Sacramento and were treated to one of my favorite restaurants in Sac--Greek food...mmmmmmm!  Early to bed on Friday as we were all pretty tired.

Saturday morning we were up and off to SF.  Once we got there we picked up our race information (beating the crowds thankfully!) and found our names on the wall! 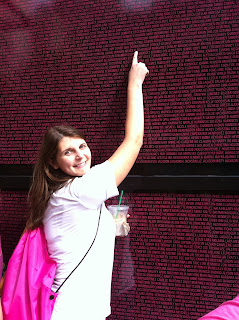 Mine was way up there this year. 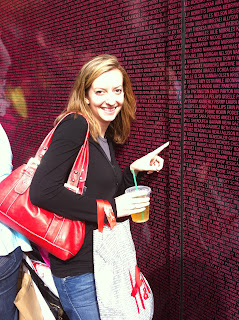 S's was on the building crack.

A few folks went sight seeing but S and I decided to go shopping instead.  Pretty soon we'd exhausted H&M and some other shops and decided to head back to the hotel.  I started to lay out my race stuff.  Bright pink bibs and bags for the half marathoner's this year---the full marathoners got a really ugly green bag (yet another reason never to do this race as a full). 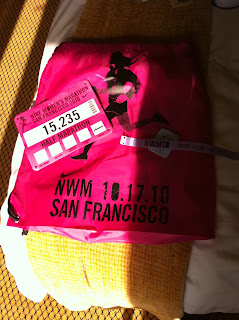 Awhile later the sight see'ers came back and we ordered take out pizza for dinner.  This has to be one of the best decisions ever.  It was soooo much better than fighting restaurant crowds PLUS I got to eat dinner in my PJs and watch the Giants game.  Later than evening Kristen and her sister arrived.  Kristen had just done a century ride!  I'm totally in awe of her, century ride and then a half marathon---crazy!  She told us about her day and pretty soon it was time for bed.  Alarms set for 5:00 we were off to dream land.
Sunday morning came early---as race mornings usually do.  We got dressed and had the luxury of hanging out in room until close to race time as we were only a couple of blocks from the start. 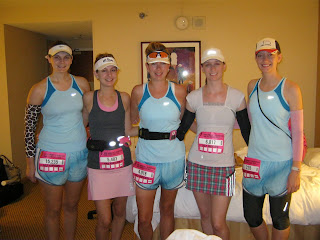 Good morning world.  Kristen, S and I had matching Tiffany Blue outfits.
We made our way to the start line and holy cow---where did all these people come from?  Last year, I remembered it was a little crowded but not too bad.  This time it was wall to wall people! 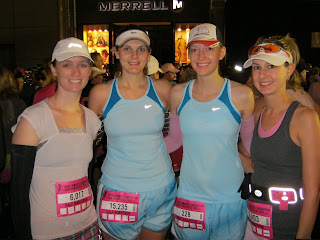 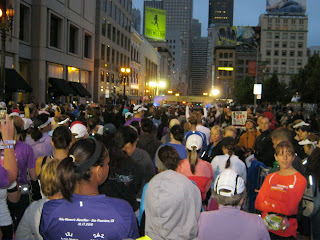 Start line of the 3rd largest half marathon in the world.  It took us a good 20 minutes to cross the start line.
Miles 1-4ish aren't all the exciting.  The course winds it's way through the city and down to the embarcadero and along past touristy places like Pier 39, Boudin Bread and Ghiradehli square.
Around mile 5, the hills begin.  From last year, I remembered the long almost mile long hill at mile 6 but I had kinda forgotten about the short steep ones.  I also didn't remember it being so crowded.  This year there were a few places where the road narrows, I definitely felt a bit claustrophobic.  Almost to mile 6 (I think) we stopped for a bathroom break.  The lines were ridiculous everywhere b/c of all the people and I think we were stopped for at least 10 minutes.  But, it didn't matter, we weren't running for time, just for fun! 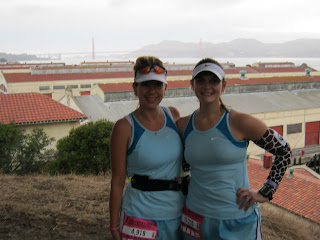 I think this was near Fort Mason. 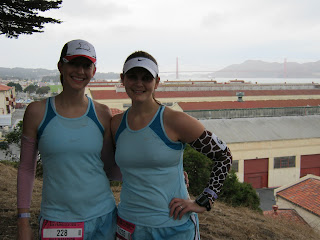 Again, near Fort Mason with the Bridge in the background. 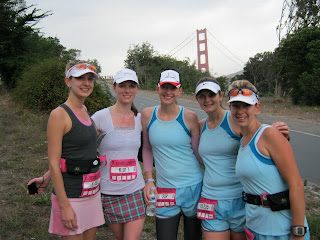 All 5 of us!  There were actually signs indicating that this was a good spot for a photo op.  We didn't have any trouble finding someone to take our photo either, so many people were along the side of the road also taking photos. 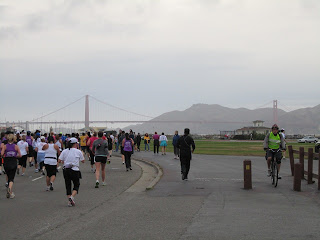 Another pic of the bridge and the CROWDED race.
With all the uphills come some awesome downhills.  One notable one is along the great hwy where it really opens up and you can see the Pacific Ocean.  It's beautiful but at the same time also annoying b/c you can see the finish line and you still have to do a few miles through Golden Gate Park.  In the park at the chocolate mile we got to see Audrey though---she was volunteering and cheering away!


Pretty soon we were at the finish! 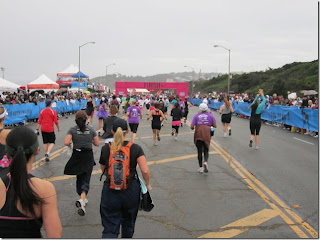 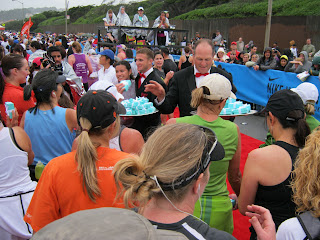 AND...what we came for our Tiffany's! 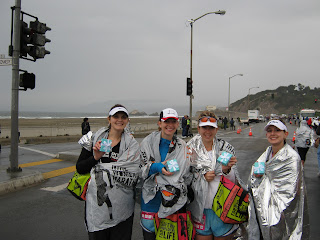 Bundled up in our dry clothes and space blankets with our Tiffany blue boxes in hand. 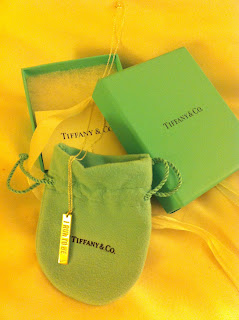 Here is the necklace up close.  It says "I run to be."
Honestly, this race seemed to really fly by even though we finished in like 2:52 (officially)---my watch said 2:40 (I stopped it at the bathroom).  It was sooooo much fun to have a group of awesome women to run with for 13 miles.  While I didn't like the crowds this year, the course is scenic and the swag (not just the necklace, you get all kinds of food at the end and the shirts are cute---sorry didn't take a photo of them) is awesome.  I'll be putting my name in the lottery again next year.
While we were out enjoying the hills of SF, Mr. Pi and Zoey were also running.  Zoey finished her first doggie dash 5k in Chico with Mr. Pi.  I think it was a PW for Mr. Pi but he said it was lots of fun.  Zoey got a finishers necklace too---though I doubt this one was Tiffany's! 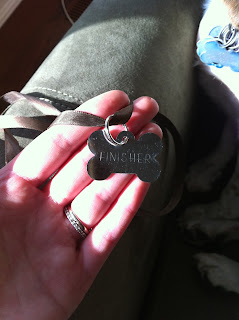 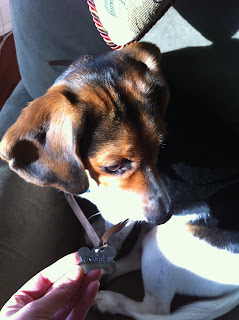 After an eventful weekend, I'm happy to be back at home.  Congrats to all the racers this past weekend, there were several of you!
Posted by Alisa at 8:02 AM
Labels: Nike Womens Half Marathon 2010
Newer Post Older Post Home