Saturday, I headed out to The Dalles, in the Columbia Gorge for my second triathlon. Jen was doing the Olympic and had told me about the race a few weeks ago. It was great to have her there as well as Mr. Pi and Zach. When I signed up for the race I assumed it was the same distance as my other sprint tri (1/2 mi swim, 12 mi bike, 5k run). Turns out this race was slightly different .5k swim, 20k bike, 5k run. However, when we got there and listened to the course routes it turns out that the bike course was 15 miles and 30 miles for the two races (20k according to google is 12.4 miles). This of course made me pretty nervous, especially when the announcer said “The bike course will be nice and challenging for everyone with rolling hills.” YIKES! I knew I was undertrained for the bike and with the addition of extra miles and hills, I was even more nervous. Here’s how it went.

Short version of the stats:

Overall Time-2:00:11 (The run, swim and both transitions were faster this time around. I anticipated the bike to be slower.)

Note: Jen, did awesome and placed 2nd in her AG! Way to go Tri Guru. 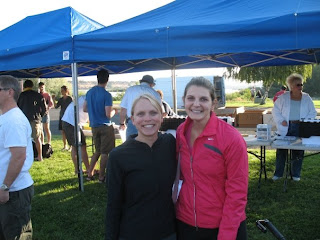 Me and Jen before the start. 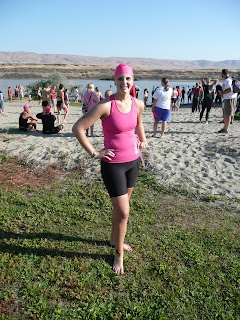 Posing in my cap, ever since my first ever swim meet I've always thought caps look ridiculous in pictures! The only thing worse are pictures of me in my old water polo helmets!

I wanted to push harder this time on the swim course and I definitely did on the second half but I think I can still push harder. This was also my first encounter with the “washing machine.” From the start to the first buoy there were lots of elbows and feet in my face. After the first buoy I said screw you people and took off. I started passing people right and left, it was great. For a little while, I was out in the open, all by myself. It kinda freaked me out, I thought maybe I was way off course but I kept sighting and kept going. The swim felt good but again I think I could push harder. 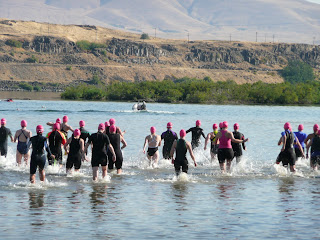 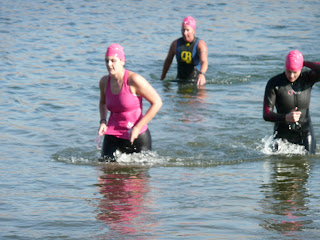 My only goals for the transitions were to beat my times from last time. My time at Blue Lake was 3:14, so I succeeded. I also took more time to dry off my feet because last time they were soaked. Other than that transition was pretty uneventful. 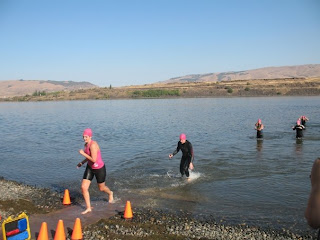 I was really nervous going into the bike as I knew it was going to be challenging. I haven’t trained as much on the bike and I knew the course was going to be challenging. There was a little hill on the way up and over the freeway. This is where I started to get passed. From here on out most of what I heard was “on your left.” I did feel pretty good knowing that lots of guys passed me, which means I passed several of them on the swim. The bike course was, as touted, challenging. There were a couple of larger hills but it felt mostly uphill until the turn over (minus one awesome downhill, which sadly was going to be an uphill on the way back). At the turn around, I stopped for some water since I still don’t know how to drink and ride (need to work on that). On the way back I tried to focus and not worry about the Olympic distance competitors who were now also starting to pass me. I really tried to enjoy the scenery which reminded me a lot of Northern California, minus the absolutely stunning views of Mt. Hood. I also concentrated on not braking the down hills. I’m usually a big fraidy cat on down hills but I just let it rip. Even so, I knew my time was really slow. Definitely need to work on biking and hills next season. Also, still need a new bike, creaky mountain bike is not cutting it. 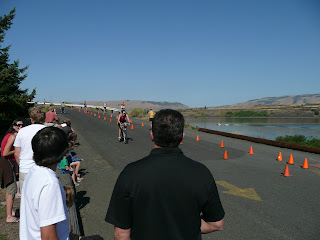 Again, my only goal was to beat my time from my first Tri. Time at Blue Lake was 2:23, another success. I will say that the transition area was closer to the swim and bike exits. Even so, I’m happy with my transitions.

I started off on the run really strong despite the challenging bike course. I was plugging away with a 10:30 pace. Unfortunately, I got a side cramp that forced a walk break about a mile in, from there it was downhill with the pace. I saw Jen heading out on her 10k about half a mile from the finish, it was a much needed boost to get a high five. She looked so strong! I need to continue to work on building my speed outside of brick runs and I think I need to start doing longer brick runs. Nonetheless, my run time was faster than Blue Lake. (Blue Lake was 37:50.) 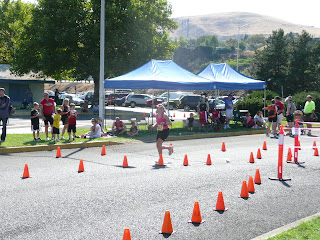 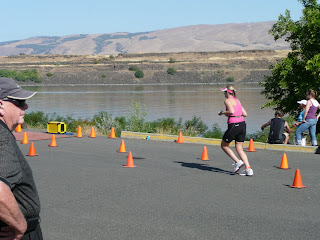 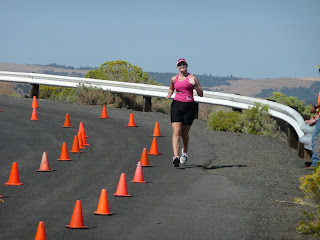 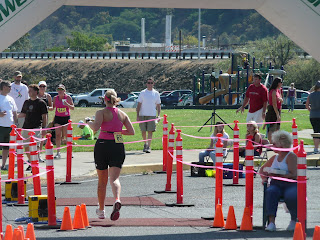 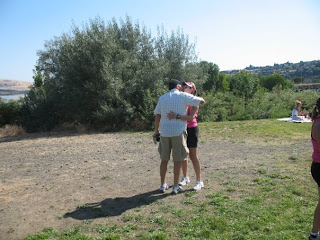 Better than any medal, a kiss from Mr. Pi!

A few pictures of Jen. 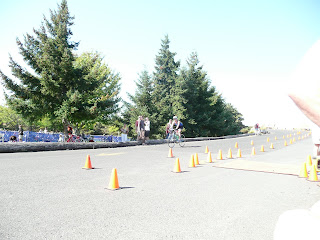 Coming off the bike into T2. 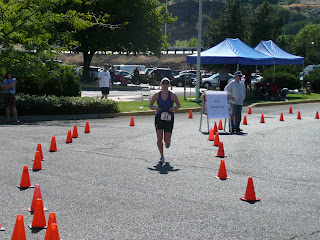 Jen off on the run. 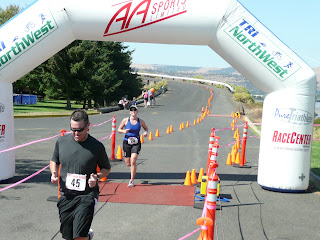 Looking strong at the finish! 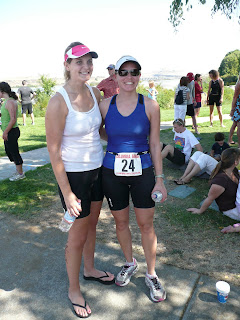 Yay, another Tri under our belts! 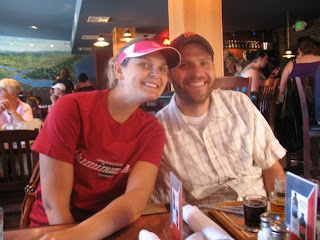 1) I still love the sport of triathloning!

2) I need a different tri top. While I love that it’s pink, it rides and gets uber annoying.

4) I need to train harder on the bike (especially on hills).

5) Next season, I need a more structured training plan. (I’m hoping Jen, Gazelle or maybe, Mr. Pi, will be my tri training partners.)

6) Mr. Pi is the best race spectator/supporter ever!

7) Female competitors are way nicer than male ones.

8) Continue to include swim intervals in training. Push harder on the swim course, I would love to be in the top 20 overall on a swim.

9) I need to work on longer brick runs and more speedwork.


Saturday night I was in bed and asleep by 8:30pm it was glorious. Here’s to another great race and more lessons about triathloning learned. Watch out Tri season 2010!