Saturday I became a Triathlete! 2009 has been an awesome year race-wise for me. I set 2 marathon PR's (Jan and May), a half marathon PR with Julianne in April and I started training for a triathlon. A little background, I've been a spin class junkie on and off for a few years and I've been swimming since grade school. I played water polo in HS and college and swam with a Masters team for a little while. I started running 5k's in college. I haven't gotten any faster since college but I've certainly loved to enjoy the challenge running brings. I've wanted to do a triathlon for a long time but never had the courage to sign up for one until I met these lovely ladies. They've been my training buddies and supporters, along with my awesome hubby Mr. Pi of course. Okay on to the race report.

First impressions post-race for those that don't want to read the LONG report below:
1. I LOVED IT!
2. Can't wait to do it again!
3. All women's races are great everyone was so supportive.
4. Now that I have a baseline time and I know I can finish all three sports, I'm ready to kill it next time around.
5. Loved it, loved it, loved it!

Mr. Pi and I arrived pretty early since I was nervous about picking up my packet and getting a good transition spot (even though I really had no idea what a "good" spot was from a "bad" spot). I got my race packet and had my first experience with being body marked (in fact, all you seasoned veterans, how do you get it off? I've scrubbed and scrubbed and it ain't coming off!). I set up my bike and transition area next to this really nice woman, who gave me some good pointers. Pretty soon it was time for the swim. 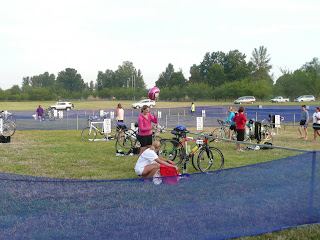 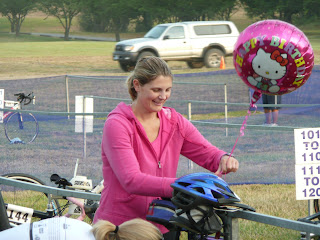 Few shots of me setting up transition.

SWIM 1/2 mile
This is my sport! I love the water and am really comfortable swimming. I've done a few open water swims in training so I felt ready to go. I was also prepared for getting kicked, scratched and dunked. Non of that happened. I didn't even make any contact with another swimmer until the first buoy. I took the swim very conservative since I wasn't sure how my body would react to all three sports. Next time, I'll attack it! Swim time: 16:46.

I learned a few things for next time:
1) Push harder on the swim! When I finished I felt like I could have done another 1/2 mile easy! Next time, I'm going to attack the swim. My swim time was a little disappointing given that I've swum the distance faster in a pool.
2) Don't line up in the back. I spent a lot of time dodging other swimmers.
3) Continue open water swims.
4) Add a little more speedwork into my swim workouts. 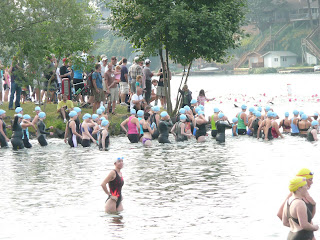 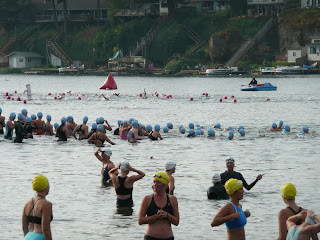 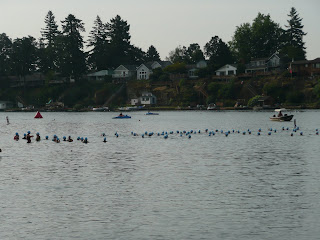 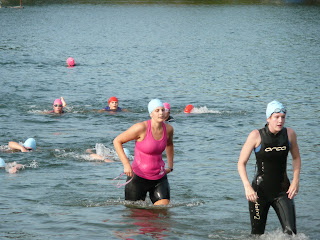 Exiting the swim. The girl to the right is the one that I had swum with a few times and would later meet up with on the run. 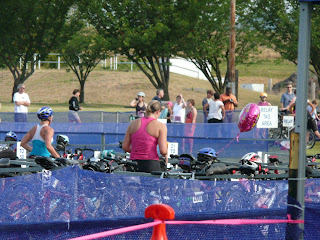 Me in T1 getting ready for the bike. 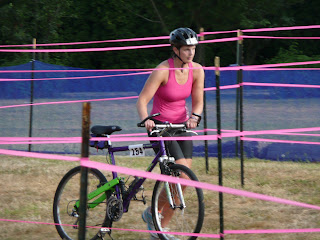 On the move with my creaky mountain bike. HEHE! 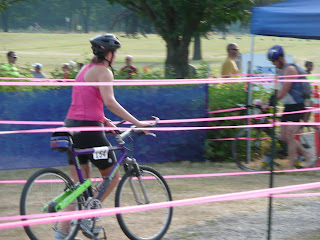 Almost to the mount point. 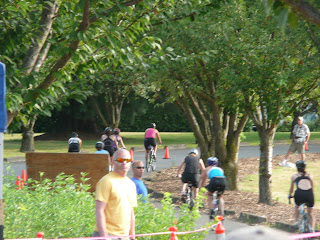 BIKE 12 miles
Holy headwind on Marine Drive heading out, thankfully it was nice and flat. However, this is where I got passed, A LOT! Like I mentioned, I've been a spin class junkie on and off but I've only been biking on a real bike outside for about month. I expected my creaky mountain bike to get passed so it wasn't a big deal. I pushed as much as I thought I could. Most of the women who passed me were so nice about it, telling me I was looking strong. I did pass a few other women on mountain bikes so all was not lost. My overall goal for the bike was to come in under an hour and I succeeded. Bike time: 49:16/14.61 MPH

Lessons for next time:
1) Get a new bike. Smooth non-creaky mountain bike would be great.
2) Practice, practice, practice! I know I can average a 15+ next time!
3) Learn how to drink and ride. I was a thirsty girl after the swim. 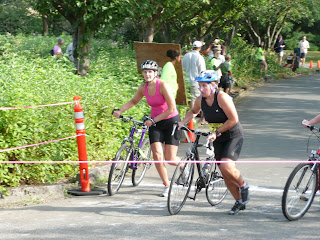 Dismounting the bike and into T2.

T2: 2:23
Again, I'm pretty happy with this time. Since I have nothing to compare it to it's a great baseline. One thing I'm really happy I did was grab my hand held water bottle. I knew there were water stops on the run but I was happy to have my own water source. 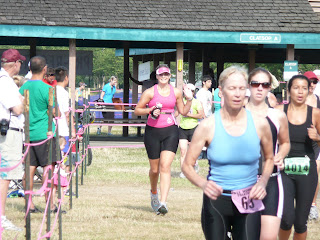 Exiting T2 and going off on the run.

RUN 3.1 miles
I'd done a few brick runs after spin class but I think I really need to work on running faster with tired legs. The run went up a small hill after mile 1, I felt every tiny incline. However, right after the mile 1 marker I saw this girl! It was awesome to high five with her! Her swim wave started two before mine and I had already seen her once on the bike. So fun to have racing buddies. Her high five helped me kick it up for a few steps. I did have to walk a little. However, after the first water stop I met up with a girl who I'd swum with a few times during some of the open water swims, for the life of me, I can't remember her name! She and I chatted as we vowed to keep our feet moving at faster than walking speed. When we re-entered Blue Lake park she wanted to kick it up a notch and I was saving my sprint for when I had the beach in sight. All along the run there were lots of friendly spectators, it made me miss my iPod less. Right before the finish line I got a big high five from Mr. Pi and the announcer called out my name. I kicked it up and sprinted in! Run time: 37:50/12:12 AP (yikes, that was a SLOW 5k)

Lessons for next time:
1) Do more brick runs.
2) Work on improving overall run speed.
3) Practice running sans Ipod.
4) Try a few two-a-days to get used to running the second run faster despite having tired legs. 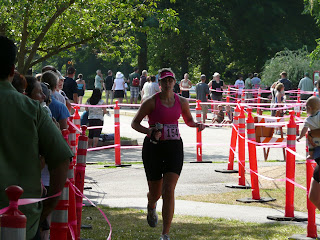 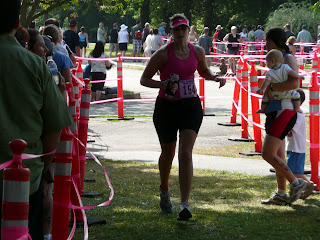 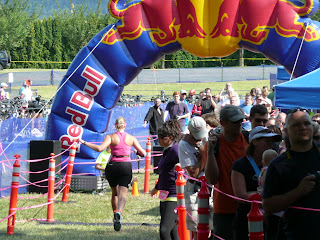 Post-race I gave Gazelle a BIG hug and congratulated her on her race. Gave Mr. Pi a BIGGER hug and smooch for being the best husband and race supporter ever. Grabbed a bit of food and we headed home. 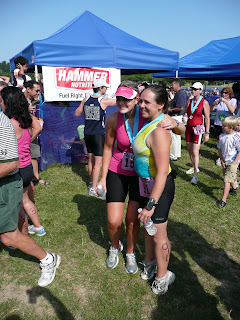 As I said up above, I will definitely be doing another Tri. I absolutely LOVED it! I think I set good baseline times that I know I can improve. I'm really happy I decided not to wear myGarmin for the bike and run. It felt good just to push and not worry too much about time. I wore my Ironman watch which is basically a stop watch but it's water proof so I could wear it in the water too. Overall, it was really accurate only 23 seconds slower than my official overall time. Overall official time: 1:49:29 and I'm happy with that.

I got 10 hours of sleep last night and am feeling great today. My booty is a little sore, probably from the bike since it was on fire when I got off. My arms and rest of my body feel fine. However, I'm still taking the day off and will resume training tomorrow. Now that I have baseline times I'm all about creating a plan to smash them next time around. Yes, I did say plan!

I am a triathlete! HOORAY!