Race for the Roses: Race Report

First, I PR'd! Waaaa-hoo! Julianne is the best pacer ever, I'm sure I was a pain in the butt at some point (i.e. miles 9-13). I'll save you the suspense if you don't want to read all the way through...I didn't hit my 2:20 goal BUT I did PR by 11 minutes with a final time of 2:27:04. (And we totally zipped past a few peeps near the end.)
Poor Julianne flew up to Portland Saturday night and didn't get to my place until pretty late. But we were both up at 5:00am eating our toast with PB and drinking our French press coffee...mmmm! I was nervous! I really haven't been nervous in a long time. I think I was nervous because I had a specific goal, I'd posted about it, tweeted it and I had a pacer who knew my goal too.
We got to the start with plenty of time and took a few pictures. Go team Giraffe! (Apparently, that's my new nickname.) 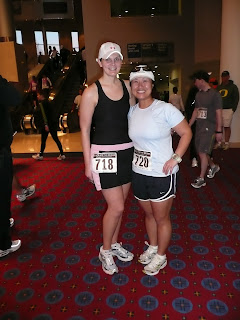 Shortly after that photo was taken we found Erika! I knew Zach and Jen were going to be there too but sadly, we didn't see them. Emily and Amy were running the 5k which started 30 minutes after the half so I didn't think we would see them. 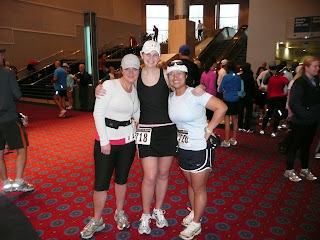 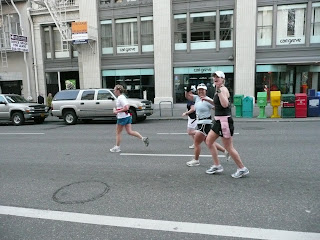 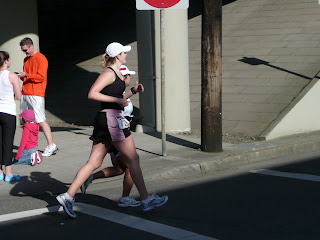 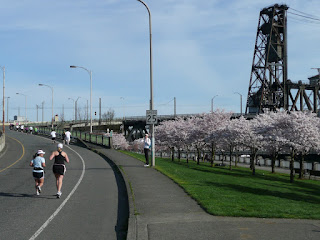 This is the that final uphill that many others were complaining about. It WAS pretty mean to put this at 12.8! But Julianne and I made it to the top and even picked off a couple of people, namely this one chick who was superduper negative for the last half a mile telling us we had to "save ourselves for the hill" that we should "walk up the hill"...whateva biotch we kicked it right on past you! AND on the other side of the bridge we had cheerleaders! Sarah (bless her heart) didn't run either race but she was at the race start to see the 5kers off and watched all the PB&J's finish! Amy was also there cheering in the final stretch, basking in her 5k PR glory!
My official finish: 2:27:04
That's an 11 minute PR, as I mentioned in the first paragraph! Next 1/2, another 11 PR! I decided I'm going to go from the 2:30's to 2:20's to the teens to singles in 2009, maybe in 2010 I'll break 2 hours =). I even have a volunteer pacer for my next race (though, I told her she should talk to Julianne first and see if she REALLY wants to pace me.) I learned some valuable lessons on Sunday. 1) I need to work on starting off slower and finishing strong. 2) I think I need more fuel. I'm going to try Gu's every 4 or 5 miles instead of one halfway through. 3) Always stay positive...I'm going to try to channel Julianne during every race from now on. She was so positive and so supportive!
There were many PR's on Sunday and everyone put in a strong finish! After the race the PB&J's met up at Mother's for brunch and celebratory champagne. 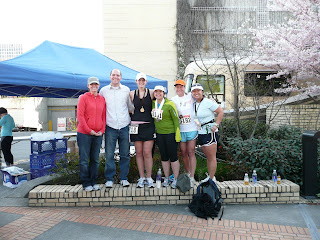 Racers and spectators, minus the Barnes' who had already gone home to shower.
(Sarah, Mr. Pi, Me, Amy, Emily (who, like Amy, PR'd in the 5k) and the best pacer ever Miss Julianne) 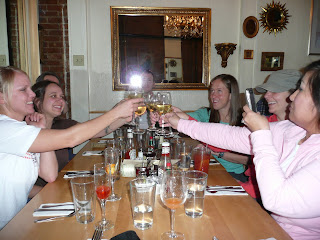 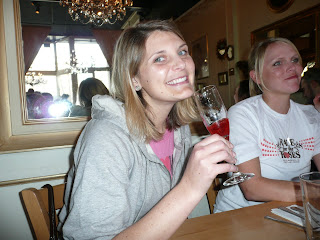 One thing that you could probably tell from the pictures is...spring finally came to Portland. The weather was just as predicated--gloriously sunny and warm (with a nice breeze). Have I mentioned how much I LOVE SUNSHINE!!!!!!!!!!!!!!!!!!!!!! 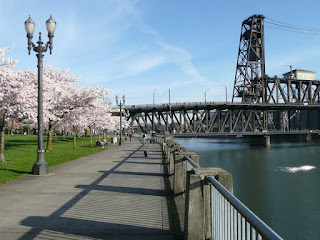