My last post left the race ambiguous as to whether I would run the full or the half marathon in Arizona. To save suspense and keep some of you from skipping over the report (since it will be a long one) I’ll just announce up front that I ran the full marathon. Yes, you heard right, I ran the full marathon bronchitis and patella tendonitis be damned! I will say, I was doing the marathon shuffle pretty early on BUT I finished. My time was slow but I still beat my first marathon time by a few minutes. I finished the marathon in sunny Arizona in 5 hours 56 minutes and change…pretty good considering the obstacles previously mentioned. Not to mention I had the worst blister ever pop at mile 21 and my stomach started to revolt against me around mile 15 and I made several port-a-potty stops between 15 and 19. All in all, marathon #2 ended with a happy smile and a sprint/shuffle to the finish.

On with the report of the pre-race festivities and of course, the actual race report. Mr. Pi and I arrived in Arizona on Friday morning. We arrived to a warm and gloriously sunny day, temps in the upper 70’s (i.e. my idea of heaven). At the race expo we realized how many more people were running the half marathon vs. the full marathon. Mr. Pi was in corral #2 and I in #8 (in SD last year we were 9 and 19 or something). Later we learned that the half marathon had over 45,000 participants and the full marathon only about 9,000. We worked our way through the expo a little faster than we did in SD last year, we were tired, hungry and I still wasn’t feeling great. We ended Friday night with a beautiful sunset from our balcony at the Camelback resort, which was a desert oasis filled with cacti and other deserty landscaping.

Here are a couple of pictures from our hotel. 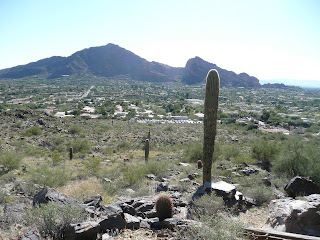 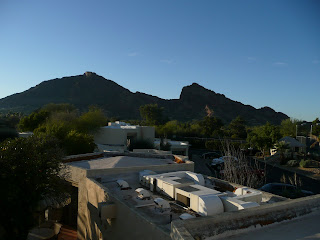 Saturday we had planned to make the 4 hour trek to the Grand Canyon BUT after sleeping in 2 hours past when we had set the alarm for we decided it wasn’t worth it (we’ll be back Arizona)! Instead we decided to go to Sedona for the day. The Running Knitter had given us some tips on places to view the famous red rocks of Sedona. We were NOT disappointed, it was beautiful! In addition, to driving to some viewing spots we also bought a red rock pass and found a trailhead and took a little hike up on one the red rock flats. From the top we had a 360 degree view of Sedona and its beautiful red rock formations. It was a great way to see the rugged beauty of Arizona. I got such a kick out of seeing wild cacti!!!

Pictures from our wonderful day in Sedona! 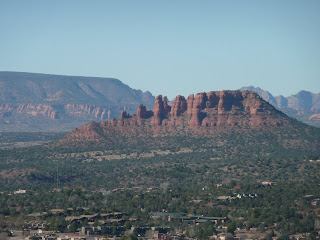 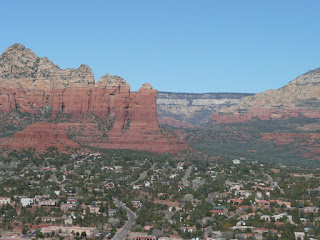 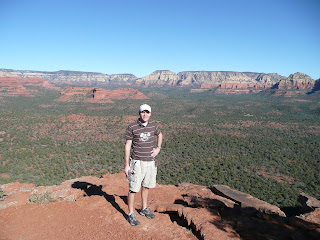 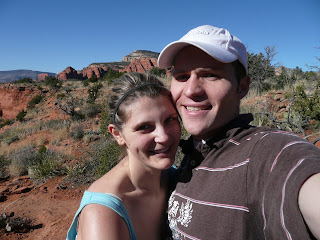 Sunday…race day! We woke in the wee hours of the morning…ate our oatmeal, I downed my coffee and we were off. Since we rented a car we decided to park at the finish line and take the shuttles offered to the start. I thought this might be a hassle BUT it wasn’t at all…we parked and didn’t have to wait but maybe 1 minute before hoping on a shuttle to the start. When we got off the bus at the start line we made the usual port-a-potty stop before heading to the start line area. It wasn’t completely clear where the corrals were set up…we wandered around a little bit before finding the UPS gear check bags and the marathon corrals. The marathon and half marathon started in the same place with the marathon starting one hour before the half. At T-30 minutes we shed our outer layers and headed to our respective corrals. As I waited for the race to start, I thought about what I wanted out the race and told myself that given everything leading up to that day I just wanted to cross the finish line with a smile. Before I knew it the Governor of Arizona sent us off into the desert sunrise. 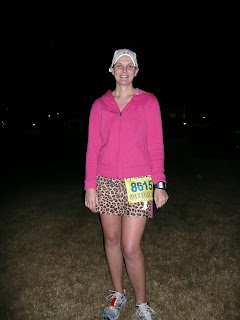 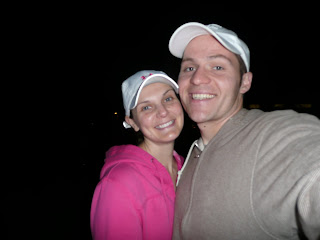 The first song on my shuffled playlist was Chariots of Fire, fitting I thought. For the first 6 miles of the race I ran 2 miles and walked .15 taking in water and Gatorade during the walk breaks, trying to stay hydrated since I knew it was supposed to be about 80 degrees. I felt pretty good, though my legs felt a bit heavy and I was coughing every few minutes. By mile 10, I was in a new race strategy, run 10 minutes walk 1 minute. I did pretty well with this strategy until mile 15ish, this is when my stomach revolted against me and I had to use multiple port-a-potties. Unlike in SD, there weren’t any lines and I really didn’t have any problem establishing my own space on the course (I am betting this was NOT the case on the half marathon course).

By about mile 17, Camelback Mountain was no longer in view, the crowd support had significantly weaned and we were running through the boring Phoenix suburbs. The course was as advertised, pancake flat, BUT it was also pretty boring. Running alongside Camelback mountain was the most exciting part of the course and that was over by what I call the “trying miles.” By mile 20 I was ready to be finished and wishing I had run the half marathon. My coughing increased and my knee started to give me a little twinge every now and then. At this point I had gone from the run10 minutes/walk 1 minute strategy, to 8/2, to 7/2, 5/1 all the way to run 3 minutes and walk 1 minute. I kept this up until about mile 24 when I threw strategy out the window and said whatever gets me to the end! The two things that kept me pumped during “the trying miles” were the phone calls I made to fellow running buddies and the comments on my running skirt! I got soooo many positive and uplifting comments about my skirt…I am soooo glad I decided to wear it! (I hope I made Cindy and Christy, owners of Runningskirts.com, proud. I certainly gave them more than a few plugs!)

I had a mini-meltdown at mile 25. I could see the ASU stadium where the race finishes and I saw so many people with medals around the necks that I just lost it. Only for a few seconds though b/c then an SUV with a bunch of girls that had run the half marathon started yelling “cute skirt,” “hey everyone, follow the skirt!” It was just the boost I needed to start shuffling along again. Then I saw it, the glorious mile 26 marker! I tried to pick it up a little as best I could. I rounded the corner and started scanning for Mr. Pi. I knew he’d be around to take my picture and I wanted it to be a good one! (Note: My husband is the most patient caring man ever, he finished in a rockin’ 3:28 and waited for over 2 hours for me to finish, sending a few texts of encouragement along the way.) Just as I saw Mr. Pi I also saw the woman in front of me drop one of her bottles. I scooped it up and ran after her reaching her before the finish line, in time to raise my arms up for a photo finish (hopefully the camera techs got that photo). The first thing I thought of was…Alisa, you did it!...despite all the obstacles to block you from this finish line, you crossed it! At that point, I didn’t care that my time was only a few minutes faster than before…I finished!

Here I am, almost finished, carrying an extra bottle to boot! 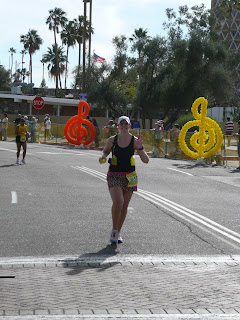 Here I am at the finish line, overtaking one last person =)...mwahahahaha, jk! 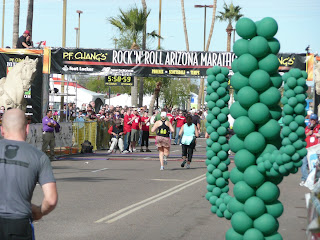 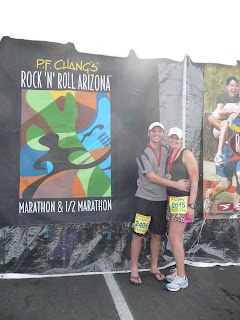 The day after. Monday was again gloriously sunny. I was sore but really not anymore so than after SD. My knee was sore but that was to be expected. At 8:00am on Monday morning Mr. Pi and were at the resort spa enjoying massages. By mid-afternoon I had had a margarita and was lying out by the pool in bathing suit soaking up the sun! We lazed by the pool pretty much until the sun went down…it was a great way to spend our last day in Arizona. (Though, we’ll be back to explore the Grand Canyon and maybe more of Phoenix too.) By Monday night most of the major soreness was gone, just my quads and my poor, gross looking pinky toe were painful.

Now that I’m back in Oregon, I’m missing the warmth of Phoenix but am happy that it’s at least a sunny day. On the plane ride back I was already starting to think about training for San Diego. I decided that I’m going to take a full 3 weeks off from running to hopefully heel the knee and overcome my cold. In the next 3 weeks I hope to concentrate on swimming, yoga and strength training. As for an SD training plan…that’s still up in the air BUT I’m thinking about trying the FIRST plan (suggested to me by RunnersRambles). It’s a 3 day a week running plan, which I think might be good for the knee, and it concentrates a lot on pace. Each of the three runs during the week has a specific pace. Since I have a pretty ambitious time goal for SD I really want to work on my pace, especially for my long runs.

With all that said, marathon #2 is under my belt! Here’s to recovery and planning for the next one.

I've been on a blogger hiatus and have a TON of posts to get through...but can't wait to read about what all of you have been up to!
Wild cacti! 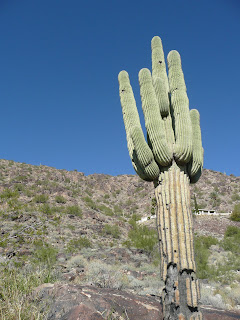